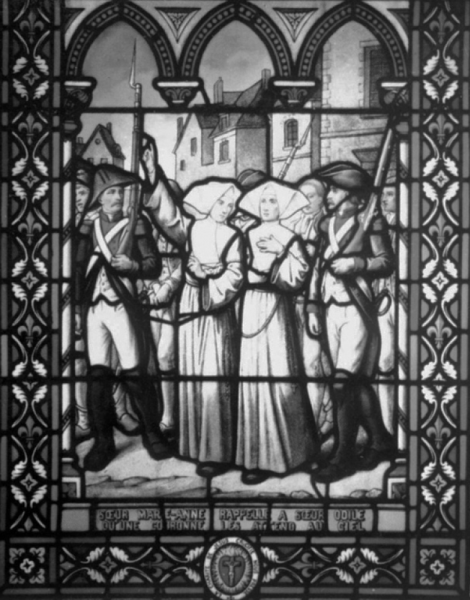 From the teaching of Saint Vincent: Everything that we experience in this world comes from God: life and death, health and illness, everything is given by God’s Providence; even if it is hard for us to see, everything happens for our good and for the salvation of people.

Marie-Anne Vayo was born May 13, 1734 in the city of Fontainebleau, near Paris. A month after her birth her father died. Her mother gave Maria a Christian upbringing. Since childhood she had close contact with the Daughters of Mercy, who took care for the poor, the sick and the orphans in her city.  When she was twenty-seven she joined the Congregation of the Daughters of Mercy. On September 25, 1761 she started her formation in Paris. A year later, she was sent by the superiors to serve in the St. Louis Hospital in Fontenay. In 1777 she came to Angers along with her sister Odilia Baumgarten, where she started her work with the sick at Saint-Jean hospital.

Odilia Baumgarten was born on November 15, 1750 in Gondrexang in the east of France in the family of a miller. Her father often told her about St. Vincent and the congregation founded by him.  Odilia first met the Daughters of Mercy in the town of Vic-sur-Seille, where she was simply impressed with their lives and work among the poor. There she decided to join them. On August 4, 1774 in Paris, she started her preparation for life in the Congregation. After a short stay in Brest, in 1777 Odilia was sent to Angers to serve the sick in the Saint-Jean hospital.

In 1789, when the French Revolution broke out, religious persecution began. Everyone, who remained loyal to the Church and to the Pope, was punished with confiscation of property, exile and even death. On Easter Friday, 1792, the National Convention issued an order to eliminate religious congregations and orders, which provide formation and take care of the sick. The General Superioress of the Daughters of Mercy wrote then to the sisters who served in Angers: “My dear daughters please do not stop to serve the poor sick unless you are forced to do this. Do not lose your courage; strengthen your faith and hope. Stay in prayer. That’s all you can do now”.

The Jacobins tied to force the sisters to take an oath, which was inconsistent with loyalty to the Church and to the Pope. When the sisters strongly refused, on January 19, 1794 they were arrested and imprisoned. On February 1, they were delivered to the square and joined other 200 prisoners. On February 1, 1794 all were shot. On February 19, 1984 both the Daughters of Mercy along with the other 97 martyrs of the French Revolution consecrated blessed by Pope St. John Paul II.

God, Thou did that blessed Marie-Anne and Odilia were in love to Christ and gave their life for faith; give us, that we were connected with You, walked in the path of love and earned an eternal reward. (from the liturgy of remembrance).

When in 1649 the Daughters of Mercy began their mission at Saint-Jean Hospital, St. Vincent said them: “Come to Angers to do honor to our Lord and His Most Holy Mother. Try to take good care of the patients. Encourage them to have a good confession so that they could really live in Christian way when they become healthy or if they die in God’s grace. Do whatever you do, due to the love to our Lord”.

140 years later, the French Revolution broke out, another of many tragic mistakes of humankind, which purpose was to create “a new France” and “a new human”. One of its ideologists, Marquis de Sade, even wrote: “Thus, citizens, religion is incompatible with the system of freedom; you feel it just like me. A free person never has bent his head to the gods of Christianity; never its dogmas, rituals, secrets, morals can comply with the Republicans … Give us pagan gods!” The implementation of the goals of the revolution by their leaders, the Jacobins, has led to the fact that thousands of murdered French people were enormous sacrifices of violence, martyrdom and persecution. For centuries, we have many examples of how the “improvement” of the world ends if it includes the struggle with his Lord and Creator.

“Everything is the purpose of God’s Providence”, – once said St. Vincent. Recently a slightly different version of these words appeared: “Everything is for something”. These words “Everything is for something” a Polish television journalist devoted to his memories, as he experienced an extremely tragic event – a fire in his apartment where he almost did not suffer – and then he became closer to God, and saw more meaning in life and believed in God’s Providence more than before. Also “for something” is the sacrifice of Christian martyrs. As well as their courage and loyalty in martyrdom.

Sister Marie-Anne was the first questioned in front of the revolutionary tribunal in the case of refusal to take an oath. She said: “My conscience does not allow me to do this. Finally, I left my family to serve Christ. When I was demanded, I even agreed to take off the monastic clothes of our Congregation and wear a national badge, to stay with the poor. Now you can do with me what you want.” After a while, the sister Odilia said similar words.

“The blood of the martyrs is the seed of Christians”, – wrote Tertullian many centuries ago. We can add today to his words: as well as their courage and loyalty are a constant challenge for us who not yet have the opportunity to have our faith tested in such a dramatic way. Even now, when fortunately we do not have time of travails, we should ask for their intercession, so that when it comes time, we would behave like them. Moreover, today we can train in daily loyalty and courage.

Our God, let the sacrifice of Your martyrs and martyresses of all ages become the beginning of converts and closer connection with You of all those who have dedicated themselves to You.