Головна > All news > Community > Belarus > Letter of the Holy Father Francis to the Vincentian Family for the Feast of St. Vincent de Paul 27.09.2017

Letter of the Holy Father Francis to the Vincentian Family for the Feast of St. Vincent de Paul 27.09.2017 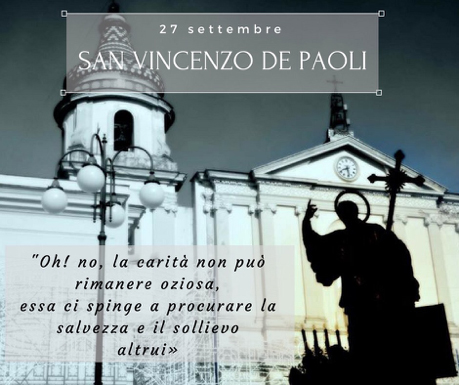 On the occasion of the fourth centenary of the charism that gave birth to your Family, I would like to extend my words of gratitude and encouragement and to emphasize the value and relevance of Saint Vincent de Paul today.

He was always progressing, open to seeking God and himself.  Grace worked to supplement this constant quest: as a shepherd, he encountered Jesus the Good Shepherd in a striking way in the person of the poor.  This occurred in a very special way when he allowed himself to be touched by the eyes of a man thirsting for mercy and by the situation of family lacking everything.  At that moment, he was deeply moved by Jesus looking at him, inviting him to no longer live for himself, but to serve Jesus wholeheartedly in persons who are poor, whom Vincent de Paul would later call “our lords and masters” (Correspondence, Conferences, Documents XI, 349).  His life then became steadfast service, up to his last breath.  A verse from Scripture showed him the meaning of his mission: “The Lord has sent me to bring the Good News to the poor” (cf. Lk 4:18).

Burning with the desire to make Jesus known to persons who are poor, Vincent passionately dedicated himself to His proclamation, particularly through popular missions and most especially by attending to the formation of priests.  He quite naturally used a “little method”: speaking first of all through his life and then with great simplicity, in a familiar and direct way.  The Spirit used him as an instrument to raise up a generous impulse in the Church.  Inspired by the first Christians who were of “one heart and mind” (Acts 4:32), Saint Vincent founded the Confraternities of Charity in order to care for those most in need.  They lived in communion and joyfully offered their possessions, convinced that Jesus and persons who are poor are the most valuable treasures and that, as he liked to repeat, “When you go to the poor, you encounter Jesus.”

This “little mustard seed” sown in 1617 developed into the Congregation of the Mission and the Company of the Daughters of Charity, branched out into other institutes and associations and became a great tree (cf. Mk 4:31-32), your Family.  Everything, however, began with this little mustard seed. Saint Vincent never wanted to be a hero or a leader but a “little seed”.  He was convinced that humility, gentleness and simplicity are the essential conditions for embodying the law of the seed that gives life by dying (cf. Jn 12:20-26).  This law alone makes Christian life fruitful.  According to this law, in giving we receive, in losing our lives we gain them and in remaining hidden we shine.  He was also convinced that he could not do this alone but rather together, as Church and as the People of God.  On this point, I enjoy recalling his prophetic insight of valuing the exceptional feminine qualities shown in Saint Louise de Marillac’s spiritual sensitivity and human understanding.

“Whatever you did for one of these least brothers of mine, you did for me” (Mt 25:40), says the Lord.  At the heart of the Vincentian Family is the search for “those who are the poorest and most abandoned” and a deep awareness of being “unworthy of rendering them our little services” (Correspondence, Conferences, Documents XI, 349).  I hope that this year of thanksgiving to the Lord and of going more deeply into the charism might be an opportunity to quench your thirst at the source, to refresh yourselves at the fountain of the spirit of your origins.  Do not forget that the sources of grace from which you drink sprang from steadfast hearts firm in love, from “lasting models of charity” (Benedict XVI, Encyclical letter Deus caritas est, 40).  You will contribute the same freshness only if you look toward the rock from which everything gushed forth.  This rock is Jesus in His poverty, whom you should recognize in those who are poor and voiceless.  For He is there.  And you, when you meet fragile people broken by past difficulties, you in turn are called to be rocks: not to appear hard and unshakeable, nor insensitive to sufferings, but to become a secure support, firm in the face of the uncertainties of the times and resistant in adversity because you “look to the rock from which you were hewn, to the quarry from which you were taken” (Is 51:1).  You are thus called to reach out to the peripheries of human existence to bring not your skills, but the Spirit of the Lord, the “Father of the Poor”.  He scatters you throughout the world like seeds that sprout in arid land, like a balm of consolation for the wounded, like a fire of charity to warm so many hearts cooled by abandonment and hardened by rejection.

In truth, all of us are called to drink from the rock of the Lord and to quench the thirst of the world with the charity that comes from Him.  Charity is at the heart of the Church; it is the reason for its action, the soul of its mission.  “Charity is at the heart of the Church’s social doctrine.  Every responsibility and every commitment spelt out by that doctrine is derived from charity which, according to the teaching of Jesus, is the synthesis of the entire Law” (Benedict XVI, Encyclical letter Caritas in veritate, 2).  Following this path will make the Church ever more fully the mother and teacher of charity, with a love that increases and abounds for one another and for all (cf. 1 Thes 3:12): harmony and communion within the Church, openness and welcome toward those outside. The Church must have the courage to give up what might be an advantage in order to imitate in all things its Lord and to fully become itself, making the apparent weakness of charity its only reason to boast (cf. 2 Cor 12:9).  The words of the Council, so relevant today, resonate in us: “Christ Jesus… ‘being rich, became poor’ for our sakes.  Thus, the Church, although it needs human resources to carry out its mission, is not set up to seek earthly glory, but to proclaim, even by its own example, humility and self-sacrifice. Christ was sent by the Father ‘to bring good news to the poor’…  Similarly, the Church encompasses with love all who are afflicted with human suffering and in the poor and afflicted sees the image of its poor and suffering Founder.  It does all it can to relieve their need and in them it strives to serve Christ” (Ecumenical Council Vatican II, Dogmatic Constitution Lumen gentium, 8).

Saint Vincent did this all throughout his life and speaks still today to each one of us and to us as Church.  His witness invites us to seek always, ready to let the Lord’s Word and His eyes upon us surprise us.  He asks us for poverty of heart, total availability and obedient humility.  He impels us to fraternal communion among ourselves and to courageous mission in the world.  He calls us to free ourselves from complex language, self-centered rhetoric and attachment to material goods, which might appease us in the short term but do not give us God’s peace and are even often obstacles to mission.  He encourages us to invest in the creativity of love with the authenticity of a “heart which sees” (cf. Benedict XVI, Encyclical letter Deus Caritas est, 31).  Charity, in fact, is not satisfied with good practices of the past but is able to transform the present.  This is all the more necessary today with the ever-changing complexity of our globalized society where some forms of charity or assistance, although justified by generous intentions, risk supporting forms of exploitation and illegal activity and do not produce real and sustainable progress.  For this reason, envisioning charity, organizing close relationships and investing in formation are timely lessons from Saint Vincent.  His example, though, also encourages us to give time and space to persons who are poor, to those suffering from the new forms of poverty of our time, to the too many people living in poverty today and to make their thoughts and difficulties our own.  A Christianity without contact with people who suffer becomes a disincarnated Christianity, unable to touch the flesh of Christ. Encounter persons who are poor and give poor persons a voice so that our culture focused on the ephemeral does not reduce their presence to silence.  I ardently hope that the celebration of the World Day of the Poor this November 19 will help us in our “call to follow Jesus in his own poverty,” becoming “an ever greater sign of Christ’s charity for the least and those most in need” and reacting “against a culture of discard and waste” (Message for the First World Day of the Poor, “Let us love, not with words but with deeds”, June 13, 2017).

I pray that you and the Church may be granted the grace of finding the Lord Jesus in your brother or sister who is hungry, thirsty, a stranger, stripped of his clothing and his dignity, sick and imprisoned but also doubting, ignorant, persistent in sin, afflicted, crude, ill-tempered and annoying.  In the glorious wounds of Jesus, may you find the strength of charity, the happiness of the grain that gives life by dying, the fecundity of the rock from which water gushes forth, the joy of coming out of yourself in order to go out into the world, free from nostalgia for the past, confident in God and creative regarding the challenges of today and tomorrow because, as Saint Vincent said, “love is inventive to infinity”.